Before the Category 4 Storm Strikes the Keys

On Friday, Sept. 1, 2017, Monroe County’s Emergency Management hosted a video meeting to provide emergency responders throughout the Keys with an update from the National Weather Service about a monster storm out in the Atlantic. It was called Hurricane Irma.

For the next six days, County staff and other emergency responders worked almost around the clock to prepare for the hurricane that was fluctuating between Category 4 and 5, and whose eye was likely to directly strike the 120-mile island chain – somewhere.

The first priority was to prevent loss of life. Mandatory evacuation notices were issued for all visitors on Wednesday morning, Sept. 6, and for all residents that night.

The storm was forecast to pack a big punch to the Keys, with high winds of more than 130 mph and a storm surge of several feet. The message was simple: “Get out of the Keys.”

Emergency Management helped coordinate the evacuation of people with special needs, brought in military aircraft to transport hospital patients to other medical facilities, and arranged for extra transportation to take people to the mainland. It also worked to keep fuel trucks coming to the Keys as long as it was safe to resupply gas stations.

Emergency Management worked to open and stock preplanned emergency shelters on the mainland to house Monroe County residents – and their pets.

As a last resort for residents who did not leave despite the mandatory evacuation notice, Emergency Management worked with the School District to open several schools for residents to more safely shelter during the storm.

Simultaneously, Emergency Management worked on preparation for the response to the hurricane that undoubtedly would leave devastation and people needing help in its wake.

Preparation priorities included putting resources and responders in place to reopen the Marathon and Key West airports (so aircraft could arrive with emergency supplies and personnel) and to make U.S. 1 safe for emergency responders and utility crews to travel.

As Irma got closer to the Keys, a decision was made for the people working in the Emergency Operations Center, located in the BOCC chambers at the Marathon Government Center, to relocate to a safer place.

On Friday morning that safer place was Key West. But within hours the storm track changed drastically and by Friday evening it was safer to go to the other end of the Keys. On Saturday morning, about 125 people from the EOC and emergency responders caravanned to Ocean Reef in North Key Largo. It was a place not only safer to ride out the storm but also a place where the EOC could continue response preparations even while the storm was striking the Keys.

While Hurricane Irma was howling, the County’s makeshift Emergency Operations Center was set up in employee housing at Ocean Reef. More than 100 people worked by a light powered by a generator. 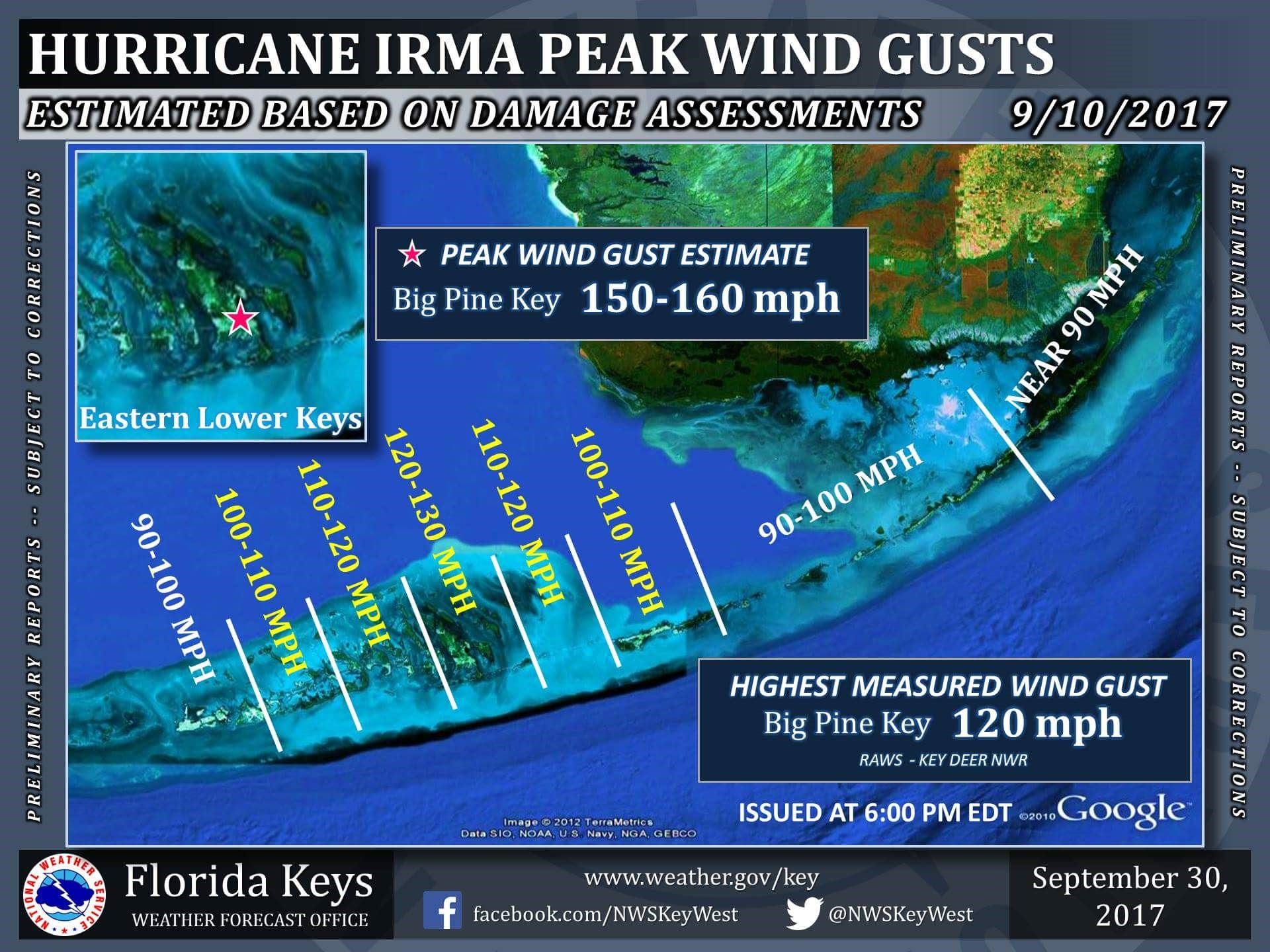 As Hurricane Irma approached the Caribbean islands, the storm reached Category 5 status with peak winds of 185 mph. It was the strongest Atlantic basin hurricane on record outside the Gulf of Mexico and the Caribbean Sea. Then Irma struck Cuba.

Initially, the official forecast track by the National Hurricane Center kept the eye of Irma over the open waters just north of Cuba – albeit the cone of uncertainty included the possibility that Irma’s center could go over northern Cuba.

And it did. The eye of Irma spent about 24 hours bouncing right along the northern coast of Cuba, causing the hurricane to weaken from Category 5 to Category 3 status.

Once Irma was back over the warm waters of the Florida Straits, the hurricane began to strengthen. On Saturday about 12:15 a.m., the outer bands of the storm began reaching the Keys.

Irma barely regained Category 4 status when it struck the Keys. While still a strong hurricane, Irma did not pack as powerful a punch as it could have had it not gone over Cuba.

The National Hurricane Center reported Irma made landfall at 9:10 a.m. Sunday, Sept. 10, 2017, on Cudjoe Key. Strong winds continued throughout the Keys the rest of the day and subsided in the afternoon. The storm also brought storm surge, up to about 9 feet in some areas.

While the Keys were weathering Hurricane Irma, Monroe County’s Emergency Management team was working out of the makeshift Emergency Operations Center set up Saturday morning at Ocean Reef’s employee housing. When the power went out, everyone worked by flashlights and a few lights powered by small generators.

Video conferences using Zoom technology were held from this makeshift EOC with the Keys municipal emergency operation centers and other emergency responders throughout the Keys and the mainland.

Emergency Management led the coordinated preparation effort to have local responders and out-of-county personnel and resources ready to go as soon as the storm passed.

Hurricane Irma left a path of destruction from Ocean Reef in North Key Largo to Key West. Some parts of the island chain fared far better than others, but all suffered some levels of damage. 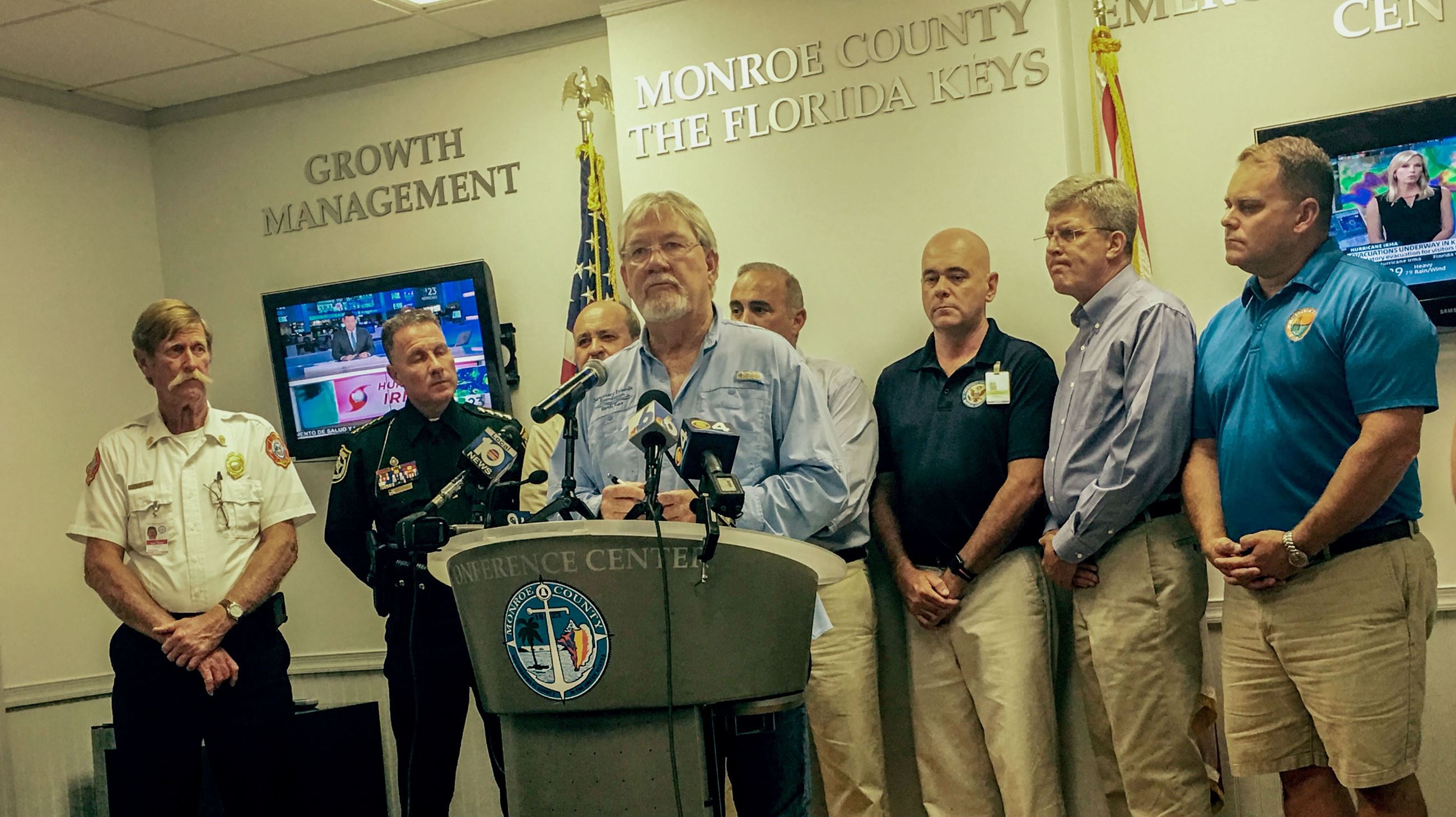 The Immediate Response and Aftermath

In the late afternoon of Sept. 10, just hours after the eye had passed the Florida Keys and conditions were safe enough to go outside, Monroe County Emergency Management put into action all its planning and preparation to lead the Keys’ coordinated response to Hurricane Irma. Monroe County’s Emergency Response was in high gear. It was a coordinated effort with the Keys municipalities and many other responding federal, state, and local entities.

One priority was re-opening Key West International and Florida Keys Marathon International airports so military and other aircraft could land with emergency supplies and personnel. Emergency responders gathered at the airports on the evening of Sept. 10 to start clearing the runways of tons and tons of debris. By the next morning, both airports were ready to receive emergency aid. By the evening of Sept. 11, the U.S. Air Force, U.S. Marine Corps, and Army National Guard were stationed on-site to help with the response.

On Day 1, the National Guard was staged in full force in front of the CVS Pharmacy in Tavernier, ready to roll. C-130s and other military aircraft flew into local airports with emergency supplies and personnel.

The Alaska National Guard was the first military aircraft to arrive. They positioned themselves in Louisiana and were able to fly around the storm to land as soon as the runway in Marathon was clear.

Another priority was inspecting all 41 bridges along U.S. 1, as well as clearing the highway of debris and making several quick repairs to the washed-out roadway to make the Keys’ only main road safe for search and rescue crews, other emergency responders and utility workers. Monroe County’s public works, Fire Rescue, and others began the effort on Sunday evening. The Florida Department of Transportation had four crews ready to go the morning of Sept. 11 inspecting bridges and other crews moving debris off of U.S. 1 and repairing washed-out roadway.

At daybreak Sept. 11, Monroe County Emergency Management relocated its Emergency Operations Center back to the Marathon Government Center. Most communications (cell phone and broadband Internet) were knocked out and work immediately began to restore service.

By 10 a.m., search and rescue missions began, with crews going door to door to look for any survivors needing help. It required getting through many local roads that were impassable due to debris. Over six days about 15,000 homes were searched.

Food, water, and temporary medical facilities began to arrive on Sept. 11 to help the survivors who did not evacuate. Food and distribution sites were set up throughout the County. The County coordinated with the American Red Cross to set up and operate shelters at local schools for those whose homes were destroyed or too damaged to live in.

Much work was done as quickly as possible to make it safe and secure for residents who had evacuated to be able to return to the Keys to begin their own recovery.

FEMA set up several Disaster Recovery Centers throughout the Keys and sent crews door to door to help people with individual assistance. The Red Cross helped Emergency Management set up shelters and food and water distribution locations throughout the Keys. Non-profit and religious-based organizations, with a small army of volunteers, helped provide meals, distribute donated goods and supplies, clear debris from people’s houses, and deliver smiles and hugs to the survivors.

Public information created and distributed flyers, provided several news releases each day to keep up with the evolving response information, posted regularly on social media sites, and worked with the media to help get information out to the community.

Non-profit and religious-based organizations, with a small army of volunteers, helped provide meals, distribute donated goods and supplies, clear debris from people’s houses, and deliver smiles and hugs to the survivors.

Two weeks after Hurricane Irma struck the Keys with such intensity that a cruise ship would be sailing into Key West with nearly 900 passengers aboard.

The Keys officially opened to visitors on Oct. 1. Tourism is the number one economic engine and our businesses need the customers and our workforce needs to get their livelihoods back.

But we also know that while many parts of the Keys have recovered quicker than imagined, the hardest-hit areas from Big Pine Key to Big Coppitt Key will take longer to bounce back.

These hard-hit areas and the people who live there still need our help. And many people in other areas throughout the Keys no longer have homes they can live in and are struggling to find housing.