In 1822, the U.S. Navy surveyed sites to determine where would be good places for a fort whose guns could command the harbor in Key West. In 1836, U.S. Army Col. Joseph Gilmore Totten and Col. Simon Bernard, a French military engineer, drew up plans for a set of nine forts. The high cost led to revising the plan to one large fort (Fort Zachary Taylor) and two advanced batteries: East and West Martello Towers.

It was not until the mid-1860s that work began on the towers along what is now South Roosevelt Boulevard. They were never armed or involved in a battle. 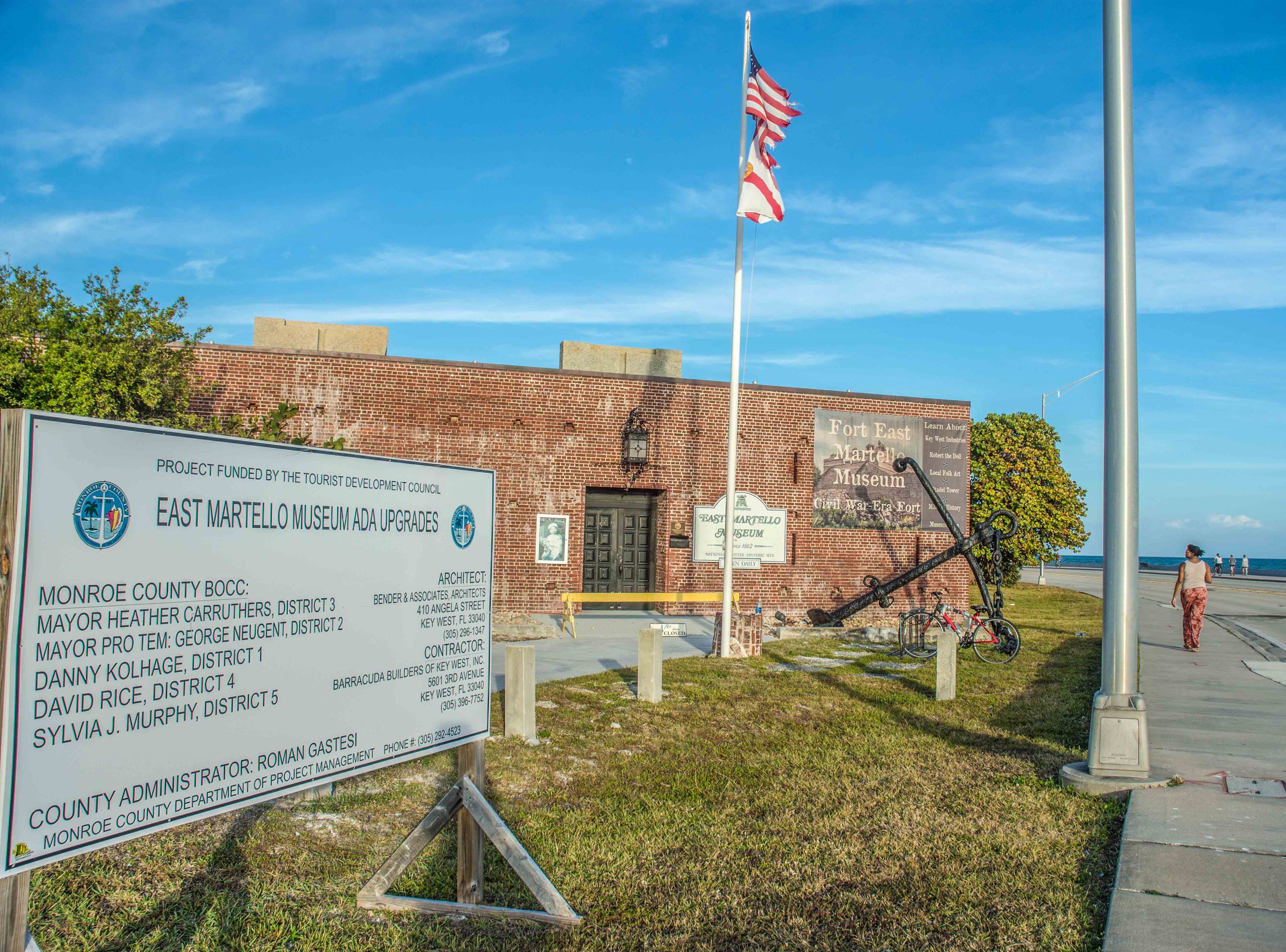 Under the guidance of Allen, the Key West Art & Historical Society restored the East Tower and opened the Fort East Martello Museum in 1950 as the first museum of the Florida Keys. In 1972, it was added to the U.S. National Register of Historic Places. The museum now houses works by Cuban folk artist Mario Sanchez, and Robert the Doll, a supposedly haunted doll belonging to the late artist Robert Eugene Otto. The County is now renovating the facility with funding from the Monroe County Tourist Development Council.

The East fort had minimal damage from Hurricane Irma, but the West fort suffered some structural and vegetative damage, including the loss of big trees.

In 2018 both the East and West Martello will have historic brick restoration work done. The East Martello will also receive drainage upgrades, road and parking repairs, and new roofing.

In 1898, the West Tower was used during the Spanish American War for quartering troops, storage, signaling and as a lookout. In 1914-44, it was used for radio stations and an anti-aircraft battery on the beach. At the end of World War II, the troops departed.

In 1947, the Army-owned towers became the property of Monroe County. The West Tower had become an eyesore to the shoreline and there was pressure in 1949 to demolish it and put in a new beach area. Rep. Joe Allen convinced the County Commission to stop the demolition. The Key West Garden Club entered into a land-lease agreement with the County. In 1976, the West Tower was declared a National Historic Site by the State of Florida and is now listed in the U.S. National Register of Historic Places.

In 2020, Monroe County Project Management is in the process of replacing the historic ammunition bunker ceilings at West Martello Tower to repair and replace delaminated and partially collapsed ceilings.

Today, the ammunition bunkers are a contemporary meeting room constructed in the 1970s. The large wood doors of the bunkers are still intact and in good condition. The Secretary of Interior’s Standards dictates that the repair should match the original finishes, board-formed concrete.

Originally, the West Martello Ammunition Bunkers are part of the reinforced concrete coastal gun Battery Inman, completed in late 1904. The entire battery was constructed within the walls of the Civil War-era West Martello fort, which was completed in 1866. The West Martello was never officially completed, as the brick fortification became obsolete due to the advent of rifled artillery in the late 1860s.