Coastal Flood Maps, otherwise known as Flood Insurance Rate Maps (FIRMs) are used to determine the minimum elevation needed for construction to reduce the chances of flooding, as well as construction methods required in certain zones.

To use this application, simply enter in the RE# (real estate number format 00000000-000000), the AK# (alternate key number format 0000000), or the Owner's Name (last name, first name format) within the red search box (top left) and the application will zoom to the property, showing a three-pane side-by-side comparison of the maps. For questions, email FloodMaps@MonroeCounty-FL.gov or call 305-453-8759. To find the RE# or AK# for your property, search the Monroe County Property Appraiser website with a property address or an owner's name.

The County has hired a consultant to analyze how flood risks are changing in Unincorporated Monroe County based on the provided studies using updated information and the best available science and technology.  The technical consultant will also be reviewing the maps and modeling conducted by FEMA and is prepared to appeal any of the maps that do not appear to be correct.

FEMA use of a single Coastal Reference Point (CRP) in Miami-Dade County to establish a set of synthetic storms for modeling is not representative of the Keys (see picture below). The storms defined using this single CRP are not realistic for Monroe County in terms of storm rate and intensity. The adjacent Southwest Florida RiskMap study used spatially varied storm rates and storm parameters; this type of analysis would be more appropriate for the Keys. It also appears that the synthetic storms did not include attenuation caused by landmasses. 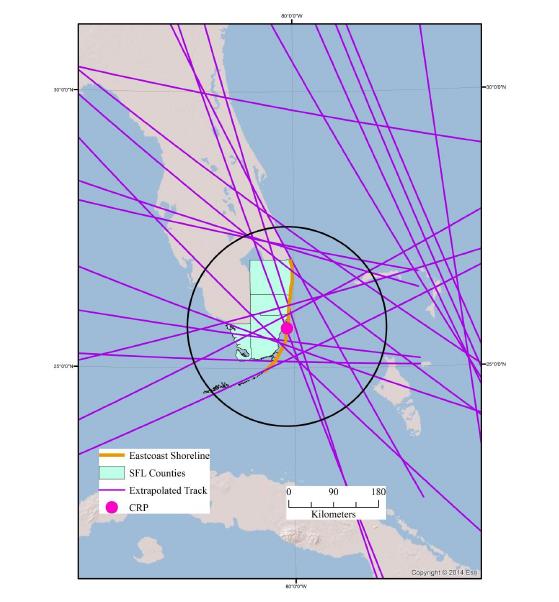 A non-standard analysis that combined storm sets from the east and west was used to develop the 1 percent water levels  (see picture below). The Combined Probability Analysis (CPS) assumed the storm sets were independent even though both sets have Atlantic and Caribbean genesis storms, potentially leading to inflated 1 percent water levels on the ocean side of the Keys. Additionally, the study did not include measurements errors in the statistical analysis, which is inconsistent with other FEMA RiskMap studies. 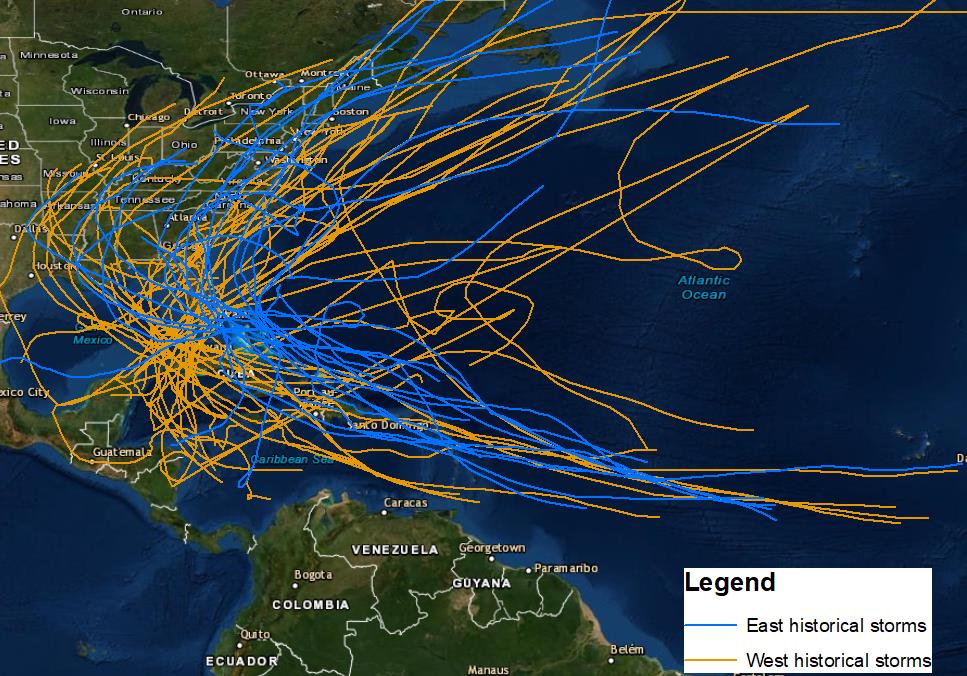 Documentation for the South Florida RiskMap study indicates the wave model was not validated against measured data, citing the lack of available data as the reason. However, a review of wave data collected by the NOAA National Data Buoy Center shows measured data at three buoys for storms impacting the Keys (see picture below). A comparison of model results against data collected during Hurricane Andrew shows an overprediction of wave height and period during the peak of the hurricane. 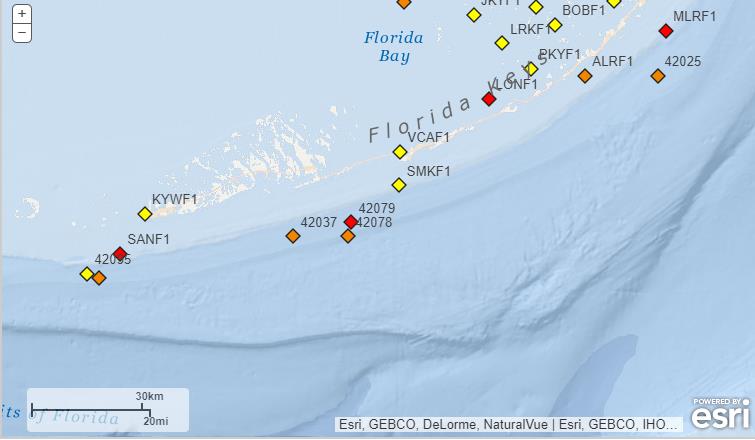 Errors in the development of the hydrodynamic/wave model mesh were identified at seven-channel locations throughout the Keys. The mesh resolution was not fine enough to allow the conveyance of storm surge and waves during all simulated storms (see picture below). 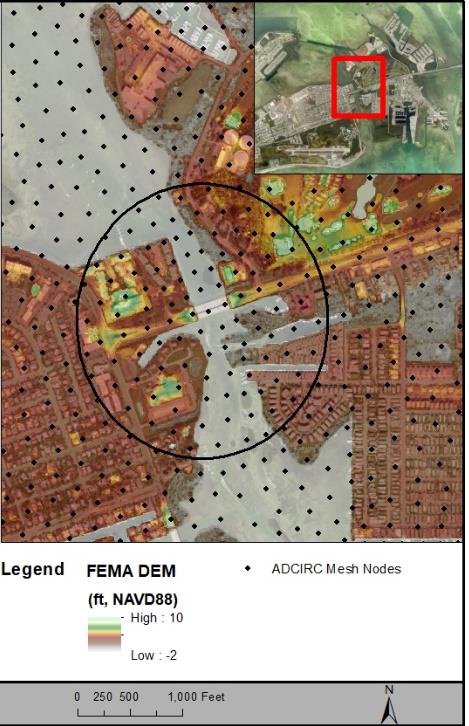 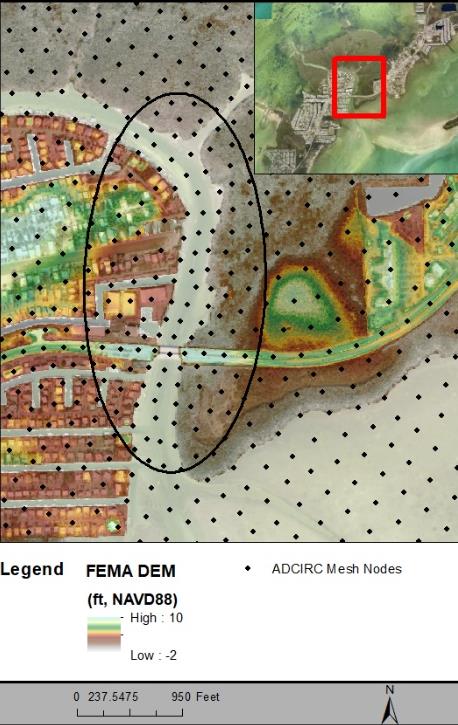 When considering reefs in the hydrodynamic/wave model, FEMA used friction values lower than recommended by the scientific literature (Figure 5). Since friction created by the reefs acts to dissipate the amount of wave energy reaching the shoreline, this issue could have an impact on the overland wave modeling and flood zone mapping. 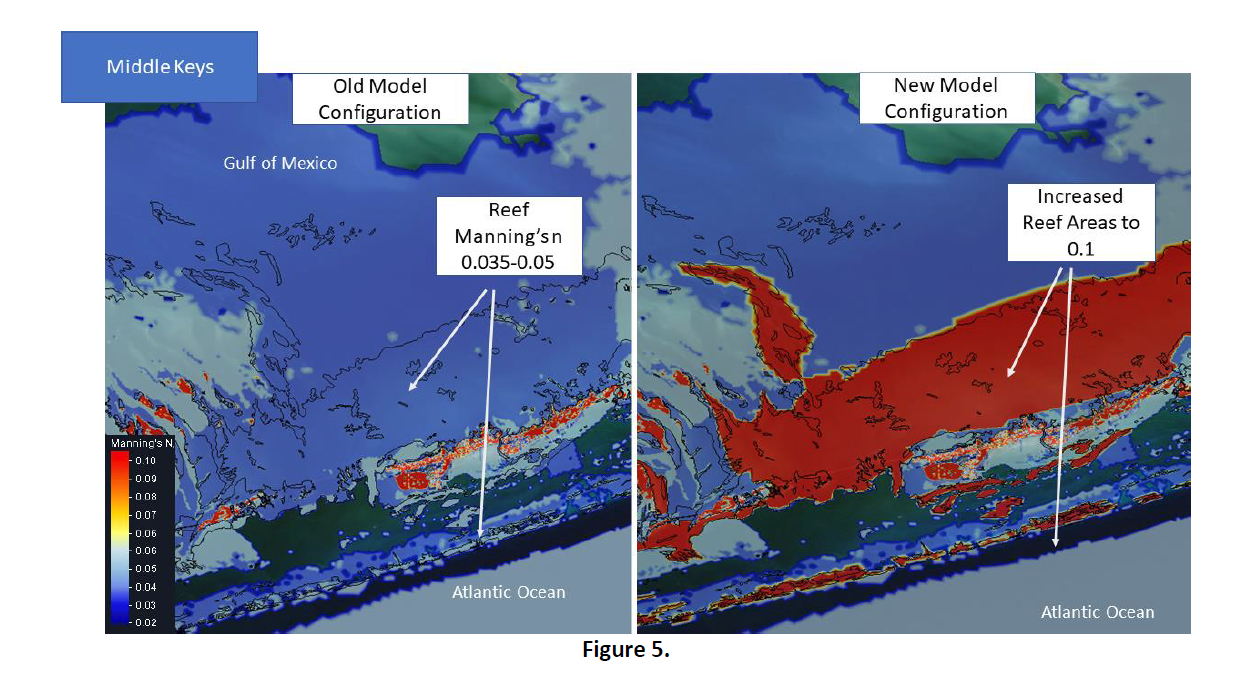 FEMA’s characterization of mangrove height and density differs from data available from the 2014-2016 South Florida Water Management District for four distinct areas of the Keys (Figure 6). Since mangroves act to dissipate the amount of wave energy reaching the shoreline, this issue could have an impact on the overland wave modeling and flood zone mapping. 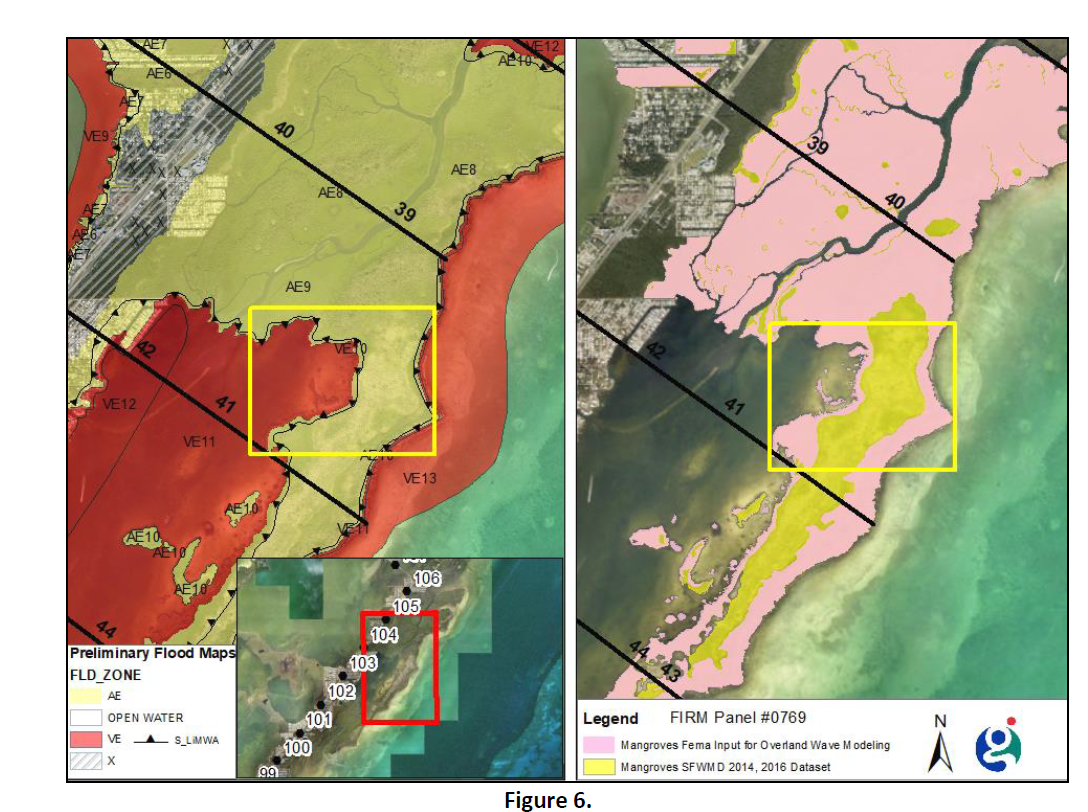 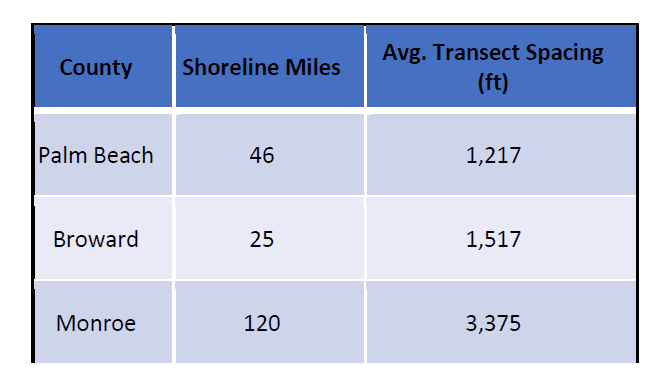 8. Topography Used for Modeling and Mapping

Topography used by FEMA for modeling and mapping differs from Monroe County mobile LiDAR data collected post-hurricane Irma in seven areas throughout Monroe County. In these specific areas, the FEMA topography is lower than the mobile LiDAR data by 0.5 to 1 ft (see picture below). Since the ground elevations influence the extent of flooding and wave action along the coast, this issue could have an impact on the overland wave modeling and flood zone mapping. 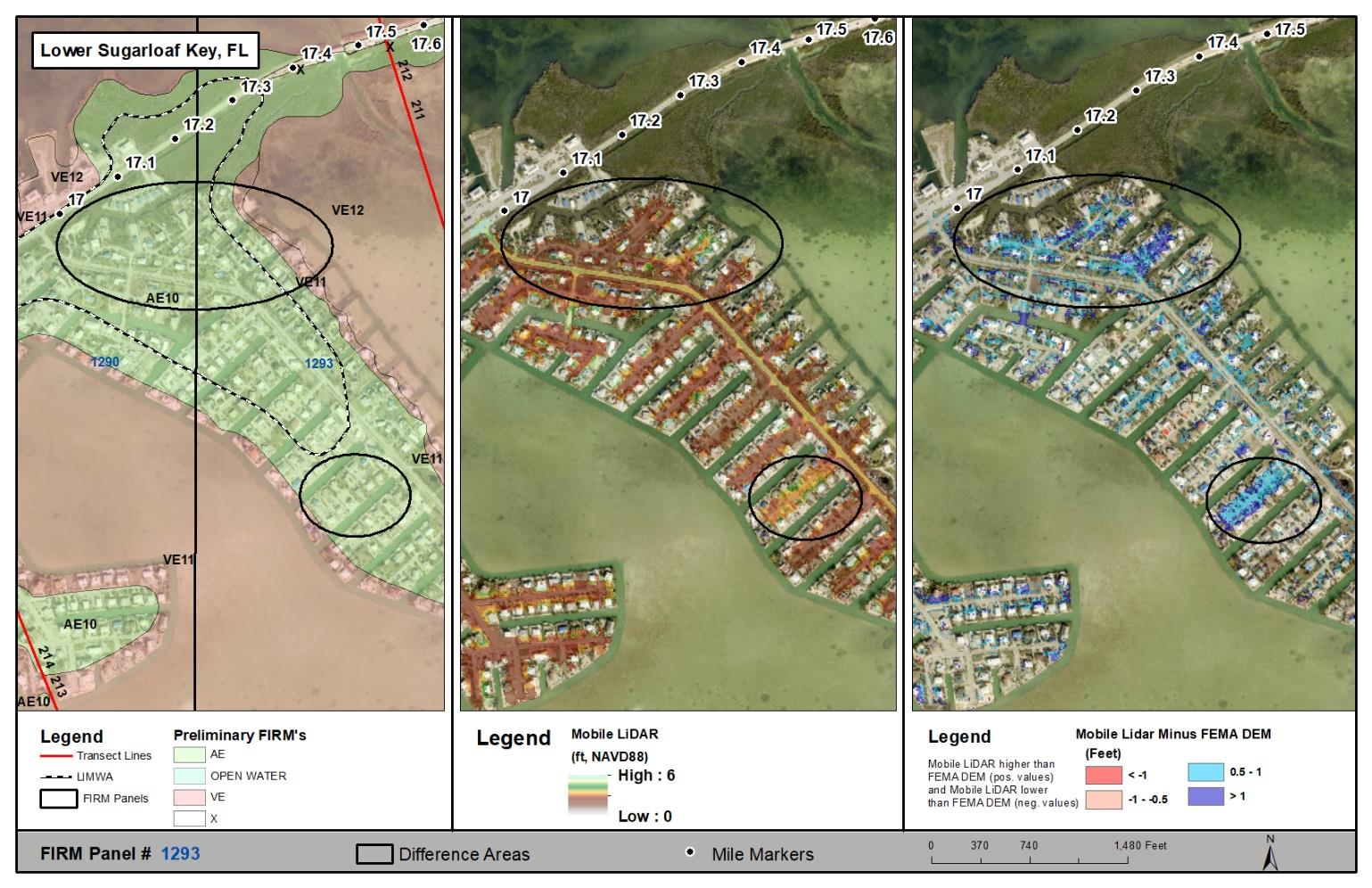 Woods Hole Group is currently working to further investigate the influence of these areas of concern on the FIRMs, and to develop the technical information necessary for an appeal of the December 2019 maps.

In December 2019, the Federal Emergency Management Agency (FEMA) released new PRELIMINARY coastal flood maps after a multi-year study of Monroe County’s coastal flood risks. After an extensive vetting process, these maps will replace the current flood maps. The current maps are based on 30-plus-year-old studies.

Monroe County wants to ensure all residents and business owners are aware of the potential for a change in flood risk for their property so that they can be more proactive in reducing their flood risk. 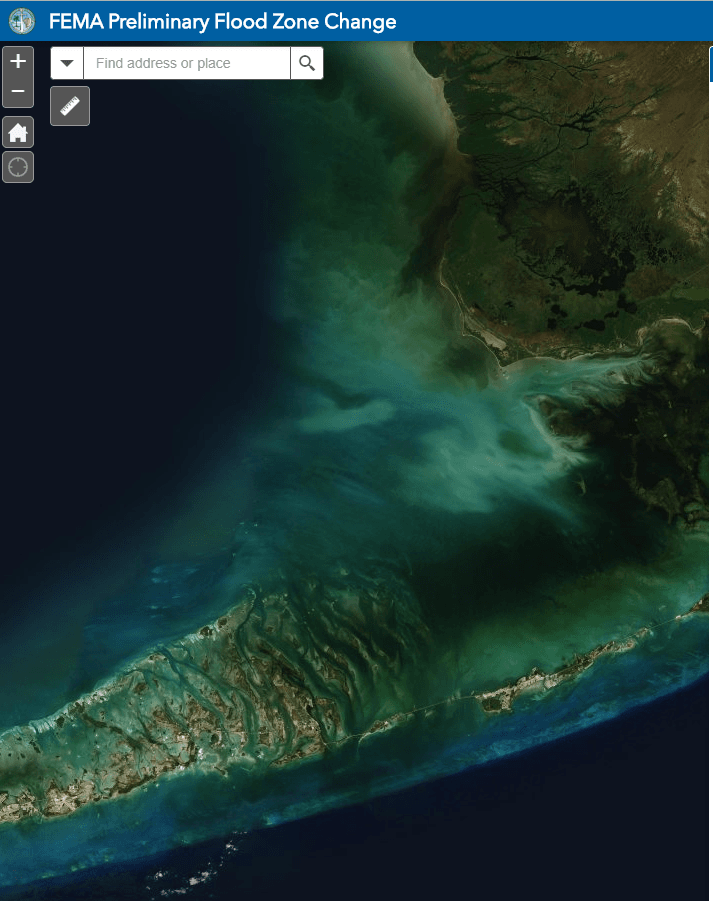 To convert one vertical datum to another, visit the ArcGIS SFWMD Elevation Conversion: NGVD29 to NAVD88 mapping tool.

Structures removed from the X-zones didn’t previously have a flood level associated with them, so this mapping standard difference wouldn’t be relevant.

To emphasize that flood risks are changing and to make sure property owners understand this is coming, Monroe County Building Department will be requiring owner’s to sign a form with permits that acknowledge the issuance of these new PRELIMINARY coastal flood maps and the fact that these maps may indicate a future change to the required elevation of a building currently being permitted.

This is intended to help homeowners understand that what they might be proposing to build today, under the existing flood maps, could become non-conforming after the maps are changed, thereby making their flood risk and insurance costs greater. Owners should think about designing their improvements to meet the proposed PRELIMINARY maps to assure they are addressing potential future risks.

During the week of January 27, 2020, FEMA held Community meetings throughout the Keys, offering the public an opportunity to view and comment in person on the proposed PRELIMINARY Flood Insurance Rate Maps. Following this, Monroe County, through its Consultant, examined the maps and the accompanying Flood Insurance Studies provided by FEMA.

Monroe County’s 90-Day Appeal and Comment period concluded on June 23rd, 2021.  While no private appeals were submitted, Monroe County, through its consultant, has appealed the Preliminary FIRMS.  FEMA is currently reviewing the County’s appeal.

Once FEMA reviews and processes all appeals, they will publish the final FIRMS. The Final FIRMs will most likely become effective sometime in 2021-2022.

When that happens, the county will formally adopt the maps by ordinance and the maps will be used when reviewing permits; and the final maps will establish what a finished floor elevation needs to be and determine building and site design requirements to reduce future risk of flooding. New lender requirements may go into effect along with flood insurance requirements, as well as changes in flood insurance rates as a result of map changes.

For more information about the FEMA mapping process, email FloodMaps@MonroeCounty-FL.gov or call 305-453-8759. To learn more about flood insurance, talk to your insurance agent, or visit FloodSmart.gov.